This is Altus Care

Imagine having your health coach or healthcare provider plus your care plan at your fingertips right when you need them – whether you forgot to take your medication, need a reminder on your rehabilitation exercise or training routine, or have unexpected pain. You could access answers, personalized follow-up and guidance immediately. You would get concise, effective treatment management and a higher quality of life, all while reducing healthcare costs.

“Patients remembered only 14% of the information when given verbally after surgery.”
See more factsRead Facts

Patients receive the clear, empathetic and holistic care they deserve around- the- clock. They are given automated, condition-specific tasks, and easy access to relevant information.

We enable healthcare providers to prescribe best practice digital care, rehab & treatment plans including all the components related to outpatient disease management. Along with cutting edge technology that advises you whether patients are adhering to your treatment or care plan, you can modify these plans to suit the individual needs of your patient.

Trained physicians, the founding executives of Area9 have a deep knowledge about brain science and experience from more than 20 years of research in human factors and adaptive learning. Consequently, they have profound respect for the complexity of individual differences in how people learn and behave.

Patient adherence is better understood through this lens, which allows for an approach to health care that is customized to each individual. There is no a “one size fits all” solution to achieving good health. Altus Care, a new project under Area9 Innovation, acts on this insight to maintain health in an improved, convenient and effective way.

Altus is a Latin word meaning “high, deep, noble or profound” which we use because Altus Care provides the highest standard of care to patients. 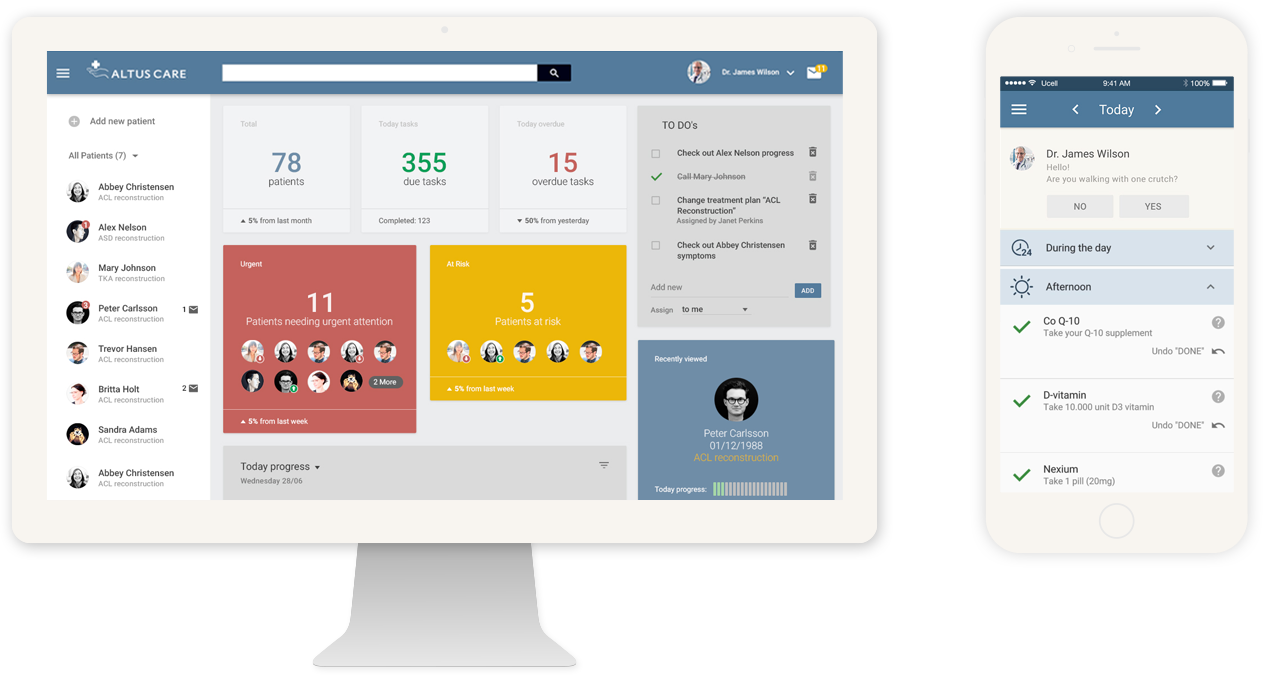 The platform is equipped with technology that indicates to health providers if their patients are adhering to their plans, and further allows them to deliver treatment tasks based on the individual needs of their patient. These tasks are given in small increments so as to not overwhelm the patient with a complex long term plan.

Precision Compliance is a new concept in medical care management that brings the right evidence-based instructions and the right care to the patient at the right time. It enlists the patient as an equal partner in their healthcare management, and empowers them to be able to follow the recommendation of their healthcare provider, even in a rapidly changing or complex environment. Altus Care allows for health providers to proactively track their patient’s condition, and identifies markers signaling an impending problem. The word precision is used because we pinpoint these markers and have ample resources to address them before it affects the patient’s health. 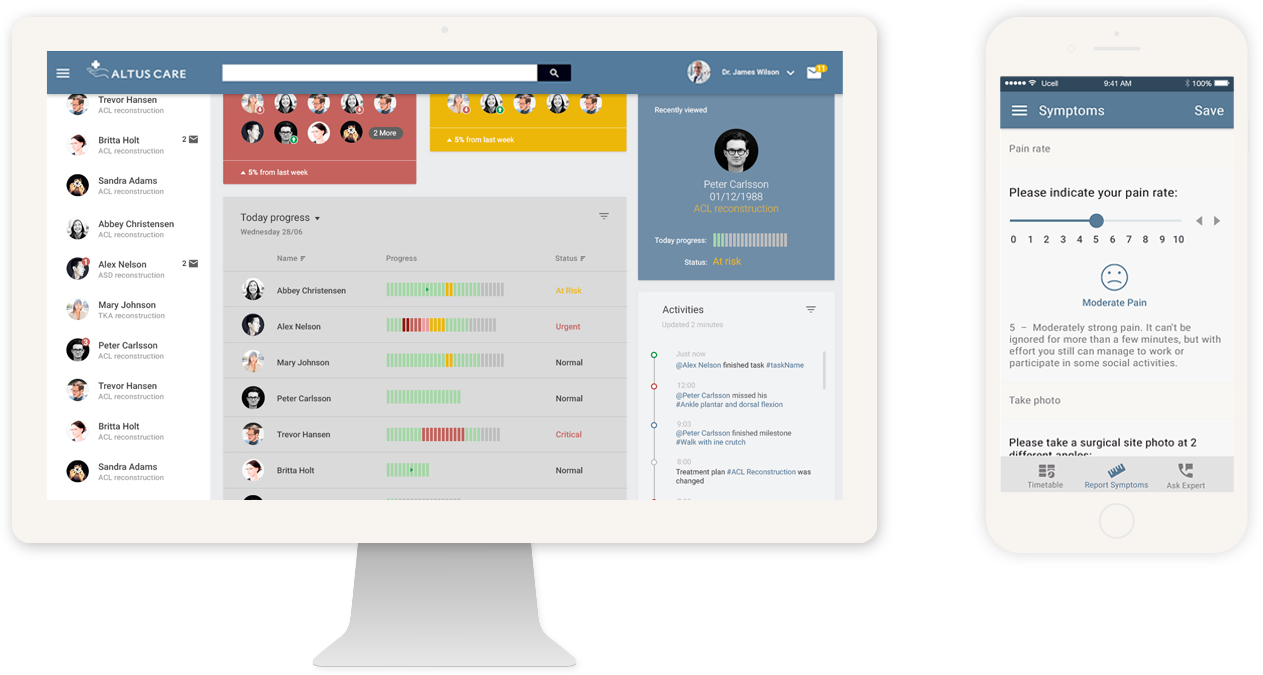 Altus Care prides itself in providing outcome driven care using an active engagement system, combining the power of technology with the care of health providers. It has been proven that active interaction with patients – that is, asking questions, getting input, having them be a part of their own healthcare – not only accelerates the healing process but also makes it more effective and reduces patient anxiety. Hence it is crucial for patients to mutually set their healthcare goals with their providers. This helps lead to behaviour change, which is how Altus Care helps patients reach their outcomes. 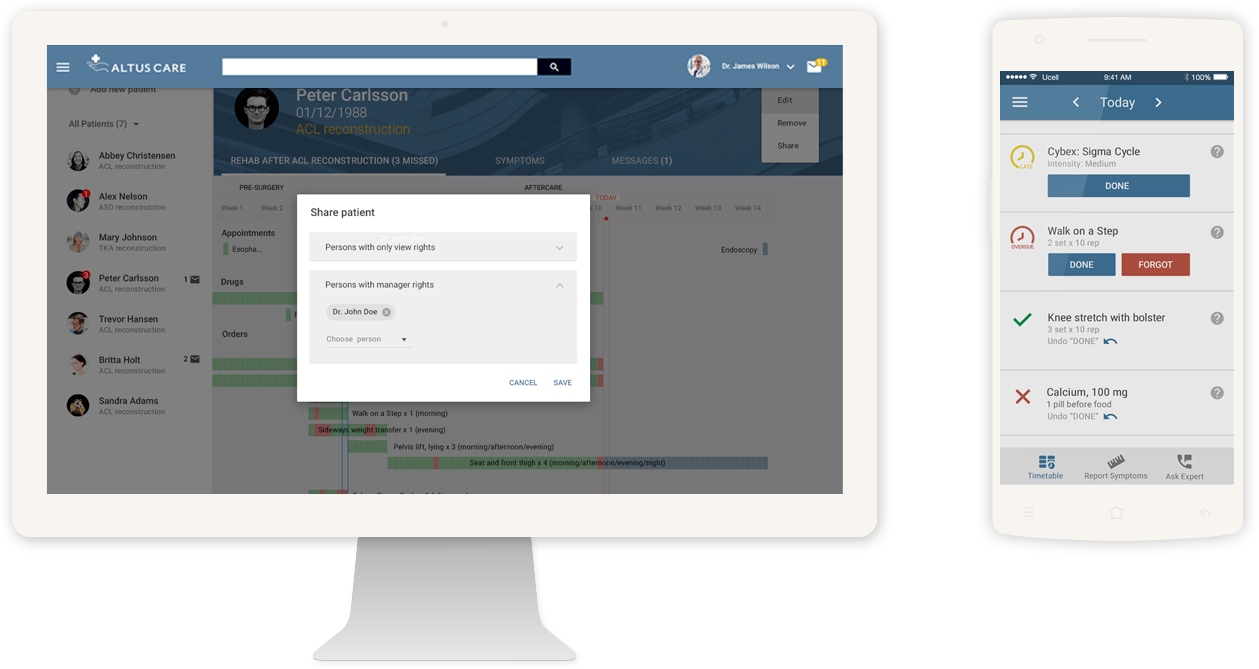 4. How Do We Manage Symptoms?

Altus Care enhances the one-on-one interaction between patient and health provider with accessible features such as chats and video demos of exercises. Altus Care tracks symptoms through a series of questions and alerts when the patient is at risk of treatment failure, early relapse or hospital admission. That’s when Altus or the health provider sends push notifications as reminders to stay on top of your recovery and provides truly personalized follow-up. It provides proactive management of the patient’s condition wherever they are, without losing the compassionate touch of a caregiver. 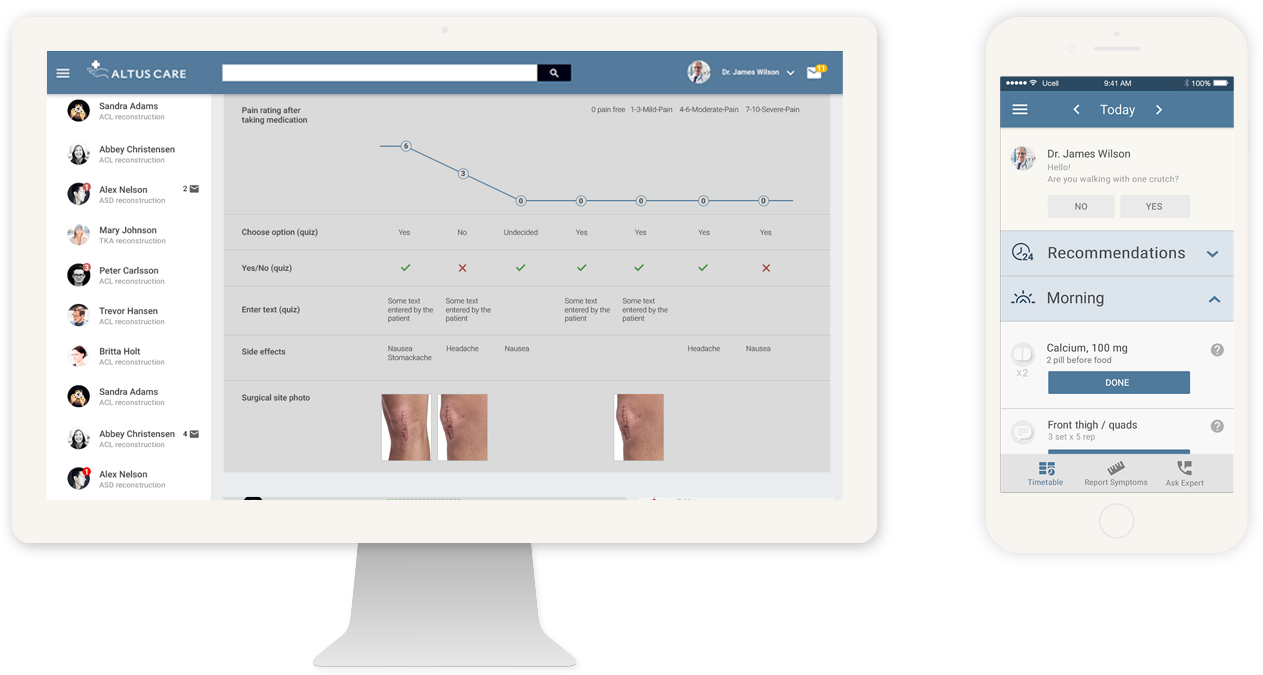 Is This For You?

Use Altus Care to identify individual patients in need of earlier intervention or other preventive measures to improve patient care and resource utilization. 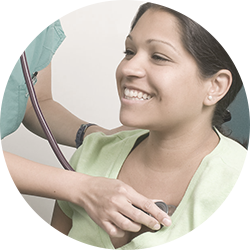 Too often patients do not have a way to communicate with their providers outside of their office. Altus Care is downloaded directly onto the patient’s smartphone so they can communicate with their provider at their convenience. If the patient is doing better or worse than anticipated, the provider is able to modify the care plan to suit the individual needs of their patient. Fully equipped with medication logs and an easy to follow schedule, Altus Care enables the patient to have a holistic recovery from the comfort of their own home. 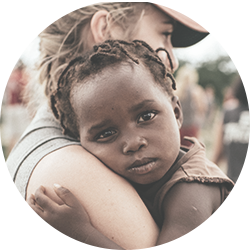 Altus Care enables you to know when a patient is at risk of failure - by not adhering to a plan, being on the brink of readmission, or hospitalization. It is possible to measure if treatment plans are improving, stabilizing, or worsening a patient’s health status, and make appropriate modifications based on this information. A unique feature is the ability to identify small daily windows of opportunity when the chance to influence patient compliance is highest. While Altus Care is not eliminating face to face interaction with your patient, it allows for their visits to be less frequent and more efficient, optimizing the recovery of the patient in a convenient way. 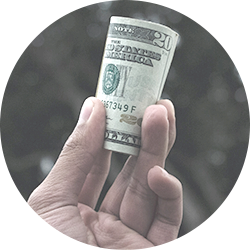 Altus Care is a platform that drives better patient outcomes. The recovery process of each individual is expedited, lowering costs and increasing patient satisfaction with improved quality of life. This platform aims to reduce healthcare costs by identifying and addressing the reasons for avoidable hospital readmission through disease management and outcome optimization. Altus Care is designed to avoid patient non-compliance with treatment plans that you are paying for. 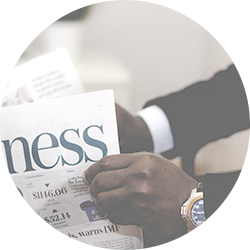 Pharmaceutical and Medical Tech companies can partner with health organizations to simultaneously support their missions, health systems and societies: to get most out of every dollar spent on healthcare. It is known that lifestyle changes benefit everyone. With Altus Care’s capacity to track adherence to medication regimes, we are enhancing the recovery experience for the patient whilst lowering costs for you.

We work closely with partners all over the world. Please contact us if you are interested in pursuing a partnership with us. We welcome everyone.

Oberon’s patent protected technology is being embedded in the proprietary algorithm which is activated via the mobile Altus app.

The founder of Oberon is professor Dr. Ilan Yaron

Dr. Berg is an internationally recognized and respected clinician, scientist and educator. He serves as Professor of Clinical Pediatrics (Critical Care) at Stanford University and Medical Director of the Revive Initiative in Resuscitation Excellence at the Lucile Packard Children’s Hospital at Stanford. He has published nearly 40 manuscripts in over 20 years of academic medicine, primarily in critical care, resuscitation and CPR performance. In teaching, he led the 2010 American Heart Association Emergency Cardiac Care Pediatric Subcommittee in producing Guidelines for Pediatric Resuscitation and the Advanced Life Support courses, taken by millions of students worldwide. Dr. Berg was a Division Director and a founding member of the University of Arizona Health Network (UAHN) Board of Directors, a 1 billion dollar per year enterprise with 6000 employees, a health plan, 2 hospitals and a physician group of nearly 500 doctors. He was appointed by the Governor to the Arizona Medical Board, responsible for licensure and regulation of 20,000+ physicians.

Dr. Berg has been with Area9, the parent company of Altus Care, since its founding and is currently Chief Clinical Advisor for the Area9 Group. He has participated in the inception, design and creation of multiple Area9 projects in medicine and healthcare, including Altus Care. He serves as the CEO.

Ultimately, the patient just wants to heal and live life as well as possible. Altus Care is there for them to help make these goals a reality.

Dr. Christensen is a worldwide expert in learning technology. He has pioneered adaptive learning, data-driven content development, simulation and debriefing technologies. He is responsible for the strategy of Area9 Group’s businesses, that span from purpose-built platforms for optimization of business processes for large corporations over digital product design to corporate training based on intelligent, adaptive learning.

He founded his first company, Sophus Medical, in 1997 while still in medical school. Sophus Medical was acquired by Laerdal Medical in 2002. Dr. Christensen was responsible for Laerdal’s global learning technologies initiatives from 2002–2006. He then co-founded Area9 Group in 2006, which has been at the forefront of adaptive and personalized learning with more than 1500 adaptive learning products based on the Area9 technologies and millions of students using the systems every semester. Area9 Education was sold to McGraw-Hill Education in 2014 and Area9 Learning was established to focus on adaptive learning in corporate and organizational environments.

Dr. Christensen was part of the McGraw-Hill Higher Executive and Education leadership teams from 2011 to 2016 before he stepped down to focus on the rapidly growing Area9 Innovation from which Altus Care was created. He serves as the Chairman of Altus Care and brings this wealth of experience and expertise to the next generation of digital health.

Precision medicine is much more than highly specific, new molecules.

After earning his medical degree at the University of Copenhagen in Denmark in 2002, Dr. Jamil chose to advance healthcare outside the clinical arena through the development of novel educational software at Sophus Laerdal — first with Combat Medic Training for the U.S. Department of Defense, and then with revolutionary simulators for the American Heart Association (HeartCode ACLS and PALS). He co-founded Area9 in 2006 to evolve and expand these concepts beyond healthcare, culminating with the sale of Area9’s educational business to McGraw-Hill Education in 2014. Over his 18 years of entrepreneurial experience he has lead dozens of teams of medical professionals and educational scientists, led large business development and partnership efforts, and managed multi-million-dollar software development projects, including a revolutionary joint project with the New England Journal of Medicine. These core competencies drive his work at Altus Care

Artificial Intelligence is artificial. We need real humans to solve today's healthcare challenges. We try to do this by leveraging the synergy between humans and technology.

Dr. Claus W. Biermann serves as Chief Clinical Advisor to Altus Care. He has a background as MD from Medical University Bochum in Germany and a Masters in Public Health (MPH) from University Bielefeld in Germany. He was trained in transplantation and abdominal surgery as well as urology at several international universities, including the University of Chicago.

He has been a Research Fellow for Experimental Research and has an extensive publication history including work in basic science, translational science, and Value Based Healthcare Research. He served as an executive in several major healthcare industries; from Pharmaceutical and MedTech to IT and Services with GE Healthcare, Philips, Deutsche Telecom, Diaverum (global renal care) and others. He is currently the EVP for Global Healthcare Education with Area9.

Patient Empowerment will become an important element of the continuous care cycle management of many acute and chronical care diseases.

Therefore, new technologies that are easy to use and liked by the patients will become critical to improve outcomes and quality of lives"

Lenar holds degree in Computer Science from TU Dresden. From 2011 to 2015 he was a research staff member at the Dresden University of Technology, Department of Computer Science (Systems Engineering Group). During this time he was mainly interested in resource scaling aspects of Cloud computing.

Later on he joined Cloud&Heat Gmbh, where he worked as a System engineer and was responsible for coordinating EU research projects related to data center energy efficiency and data protection. Overall Lenar has more than 10 years experience of working in software development.

Since 2017 he works for Area9. Currently he heads the development team and support of all Altus users.

Teamwork is a key to success

For Patients and Health Providers needing support on Altus Care:

For potential partners who wish to collaborate with us:

Follow our conversations on the future role of patient-centred technology in health. 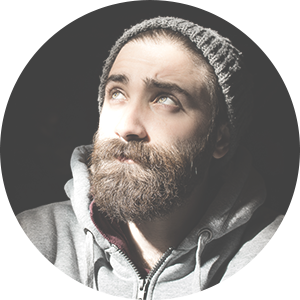 ”Patients remembered only 14% of the information when given verbally after surgery.” 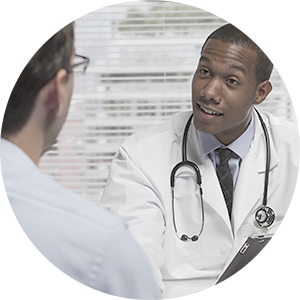 ”Physician–patient partnerships are essential when choosing amongst various therapeutic options to maximize adherence.” 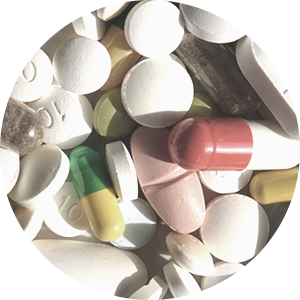